Edit
watch 01:54
Obi-Wan Finale - The Loop
Do you like this video?
Play Sound

Sinbad's Shazaam is one of the most popular examples of the Mandela Effect. It has got many people debating the existence of a movie that others claim (even the actor himself) never existed. There has been many 'explanations' to why people seem to remember the American stand-up comedian starring as a genie in a 1990s film going by the name 'Shazaam'.

History - Where did this effect originate?[]

In 2012, a while before the Mandela Effect existed as a theory, a Reddit post popped up asking about a genie movie starring the American stand-up comedian Sinbad. Many people claimed to remember the movie and remember either renting the movie from Blockbusters or constantly watching the movie, being a childhood memory for many. However people were shocked to realise that the movie (soon named 'Shazaam' by ones with the memory) never existed. There were no records of Sinbad ever starring as a genie or a movie ever being released by the name of Shazaam. This has caused much conspiracy in many families and friends who vividly remember watching the movie.

Many people who remember the movie have asked Sinbad about the movie, however he claimed that he had never made such movie or starred as a genie.

While the story of Shazaam is not entirely clear and the lines are very blurred for some, many have claimed the following scenes take place:

Shazaam has claimed to have been wearing a golden turban, an earring, purple vest, purple puffy pants and golden pointed shoes. However, there has been other claims that Shazaam was wearing a fez. The front cover of the VHS tape has claimed to have had Sinbad with his face turned slightly to the side and with his back to a young boy. Shazaam has a tornado below him. At the top of the cover, Sinbad is in large red writing.

Possible Explanations - Could this be a mistake?[]

The following are explanations that could have possibly been the answer to this Mandela Effect. Most of these explanations consist of false memory claims. 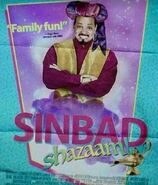 Someone's idea of what Shazaam could have looked like

Sinbad wants to close the discussion
Community content is available under CC-BY-SA unless otherwise noted.
Advertisement